"When you ring, we spring!"

In Connecticut, Bail has three purposes

How In And Out Bail Bonds, LLC can assist in the bail bond process.

After a person is arrested, the police department or court will set a bail amount (the dollar amount varies based on the alleged offense involved and other contributing factors). It is the court's way of making sure that a defendant appears at their scheduled court dates once released from jail.

Bail is the amount of money required by the court to release a defendant from custody and to guarantee their appearance in court. Bail is set by the arresting Police Department or by a Judge of the Connecticut Superior Court based on the severity of the offence, past criminal history, and whether or not the defendant has failed to appear in court.

In some cases, either cash or a Bail Bond (a financial guarantee) must be given to the court for security. The fee for bail bonds in Connecticut is 10% up to $5,000 and then the percent drops to 7% plus $150.00 after the first $5,000. If you have a bond of $5,000, the fee would be $500. If you have a bond of $10,000, the fee would be $850. If the defendant fails to appear each time required the by the Connecticut Superior Court the court will forfeit the bail and demand payment from the bail bond agency. The agency will locate and arrest the defendant and place him in custody of the court and demand payment from the Indemnitor(s) to recover their costs. If you are the Indemnitor, or Co-Signer(s) willing to be responsible for the defendant while out on bail, and you pledge Surety by signing a Promissory Note (some cases required to use property as collateral to guarantee the bond), The bondsman then guarantees the bail to the court and the defendant is released. It is your responsibility to keep the agency informed. As the Indemnitor, it is important to understand that there is absolutely NO RISK in pledging any amount of collateral to a bail agency as long as you are 100 percent certain the defendant will not flee and appear in court each time as required.

How does the Bail Bond process work?

A family, friend, or defendant calls a Surety Bail Bond Agent. The agent will ask a series of questions. The company will research the bond amount, charges, and background of the defendant. The agent will call the client with an approval or disapproval of the bond.

What is the fee for a bond posted by a Surety Bail Bonds company?

What Exactly is an Arrest Warrant?

In And Out Bail Bonds wants you to be aware of what an arrest warrant is and what it entails. According to USLegal.com an arrest warrant is "A judge's order to law enforcement officers to arrest and bring to jail a person charged with a crime." This is also called a warrant of arrest.

After an arrest warrant has been issued, the police are legally allowed to arrest the person listed on the arrest warrant. The person can be arrested most anywhere such as work, a store, or at a park. A person can have an arrest warrant issued against them if there is probable cause that they have committed an offense such as, failing to appear for a court case, domestic violence, theft, breaking and entering, or rape. As Well as many other offenses that can also lead to an arrest warrant.

If you Believe you have an Arrest Warrant, Call Our Office and we can check for you.

In And Out Bail Bonds is ready to bail you or a loved one out of jail once an arrest warrant has been issued, You Can Feel Confident to walk in to Police Department knowing that you are walking In And Out. In And Out Bail Bonds is available 24 hours a day, 7 days a week, and 365 days a year. Please call us at 860-970-3443 or 203-886-5925 to start the bail bond process.

In And Out Bails Bonds' experienced and knowledgeable bail bond agents will explain the booking process and criminal justice system to you. They will walk you step by step through the process required in order to bail you or your loved one out of jail. Once you have bonded out of jail, our agents will even call you to remind you of upcoming court appearances.

In And Out Bail Bonds Services The State of Connecticut on all Bail Bonds. We are here to help you with this unfortunate situation so please give us a call at 860-970-3443 or 203-886-5925 to start the bail bond process or to have any questions answered. We look forward to helping you so please call us today!

I often check out the judicial website on the internet and see that some people are released on "non surety" bonds and others on "professional surety" bonds. What is the differences?

What information do I need for the defendant?

What is a Bail Bondsman?

A Bail Bondsman is an authorized and licensed individual who has authorization and a license through the Connecticut Insurande Department to provide bail bonds.

Who is the Bail Commissioner?

What is the Premium?

Can I recover the Premium I pay to my bail bondsman?

No. That amount of money is used to pay for the services of the bail bondsman.

I was recently arrested and I had to post bail. Do I get the money I paid the bondsman back after my case is over?

The money you paid the bondsman is non -refundable. If you provided extra collateral money above the required mandatory fee, that money is to be returned to you after case is over, the bond terminated. Always Ask for a Receipt.

My sister was arrested and sent to the local police department , I called several bondsman and was quoted different premiums. Isn't the premium to be paid a mandatory rate set by the State of Connecticut?

What documents does a co-signer need to get a Surety Bond posted?

You will need a state issued I.D. Depending on the size of the bond you may need proof of residence and employment.

What is a co-signer?

Collateral is money or a physical property, such as real estate cars, fine art or jewelry used by a bail bondsman to secure the defendant's appearance in court. A bail agency may request that additional money, apart from the Premium be offered in order to execute bail. The property put up for collateral is usually evaluated based on the available equity you have in it or its cash value. All money held for collateral is returnable upon successful completion of court requirements.

When do I get my collateral back?

Once you know that the case has finished, you will file a written request for release of collateral and send it to our company. We will need the name of the defendant, the date of the bond and amount, the name of the person that gave the collateral, and the amount or description of collateral taken for the bond.

Who is the Defendant?

For our purposes, the Defandant is a person locked up and in need of bail. We believe that everyone is innocent until proven guilty.

What if I do not appear in Court?

That would be a bad idea. The court will order a re-arrest and there may be a new bond added. Bail Enforcement Agents will come looking for you and there will be no positive outcome. If you pay the bail yourself you forfeit whatever money or property you used to secure your freedom. If you use a bail bond service to get out of jail then the bail agency forfeits the money they used and they can use bail recovery agents to track you down and force you to appear before the court in order to not lose their money.Make sure you appear for your court date!

Why does a Bail Bondsman ask so many questions?

Agencies need to determine the risk. A Bondsman may only do a bond if he or she feels that the defendant is likely to appear. The liability on a Bail Bond is always greater than any potential for profie.

Yes! In and Out Bail bonds can get you out 24 hours a day, seven days a week, including holidays!

What is a Bail Recovery Agent?

A bail recovery agent is another name for a bounty hunter. Bounty hunters recover fugitives for bail agencies in order to force them to appear before court so that the bail bondsman does not have to lose the money he or she put up for the accused's bail.

It is important to deal with a Bail Bonds Company that has a great reputation.

Although many people offer various get-out-of-jail services, it takes years of experience to understand the complexities of the legal system. as our team does, and you don't want to trust your freedom to someone who does not have the integrity and reputation that In and Out Bail Bonds has. If you have a loved one behind bars, you can trust us to do whatever it takes to get them out. Your Loved ones Freedom is our Job!

When a person gets arrested and booked for a crime: 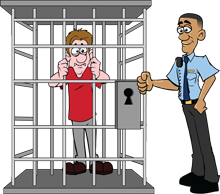 But there is a better option: 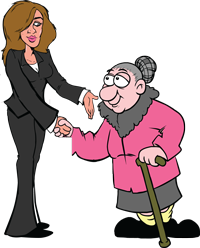 Call In And Out Bail Bonds!

Our Agents will take as much time as necessary to address all of your concerns and answer all of your questions. He or she will be happy to explain to you your options and to give you helpful advice in a no-pressure manner. If you opt to use our services, your agent will be able to post bail and minimize the time you or your loved one spends in jail, as well as explaining the easy payment plan option. We will also keep you informed of the progress and release process and clearly explain to the defendant their obligations to the court and to the bail bond agency once they get out of custody.

In and Out Bail Bonds will post the bond. 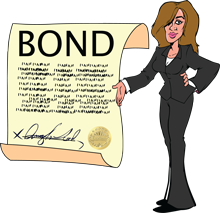 When you contact In and Out Bail Bonds have as much information as possible. 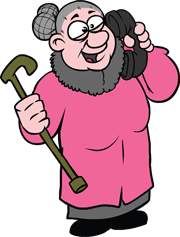 What do I pay? 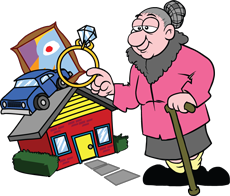 In and Out Bail Bonds posts the bond and your loved one is released. 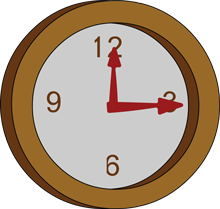 This can take as little as 30 minutes, but may take longer in certain cities.

If the Defendant appears in court 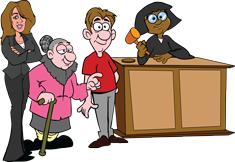 Then there is nothing to worry about.

If the Defendant fails to appear for their court date 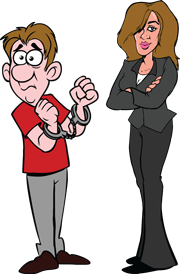 Then In and Out Bail Bonds will locate the Defendant and, most likely, return them to jail. You could lose any collateral you signed over with the bond.

When the trial is over

The bond is exonerated, or completed.

The bond is complete regardless of whether the defendant is found innocent or guilty.

When You Ring, We Spring! 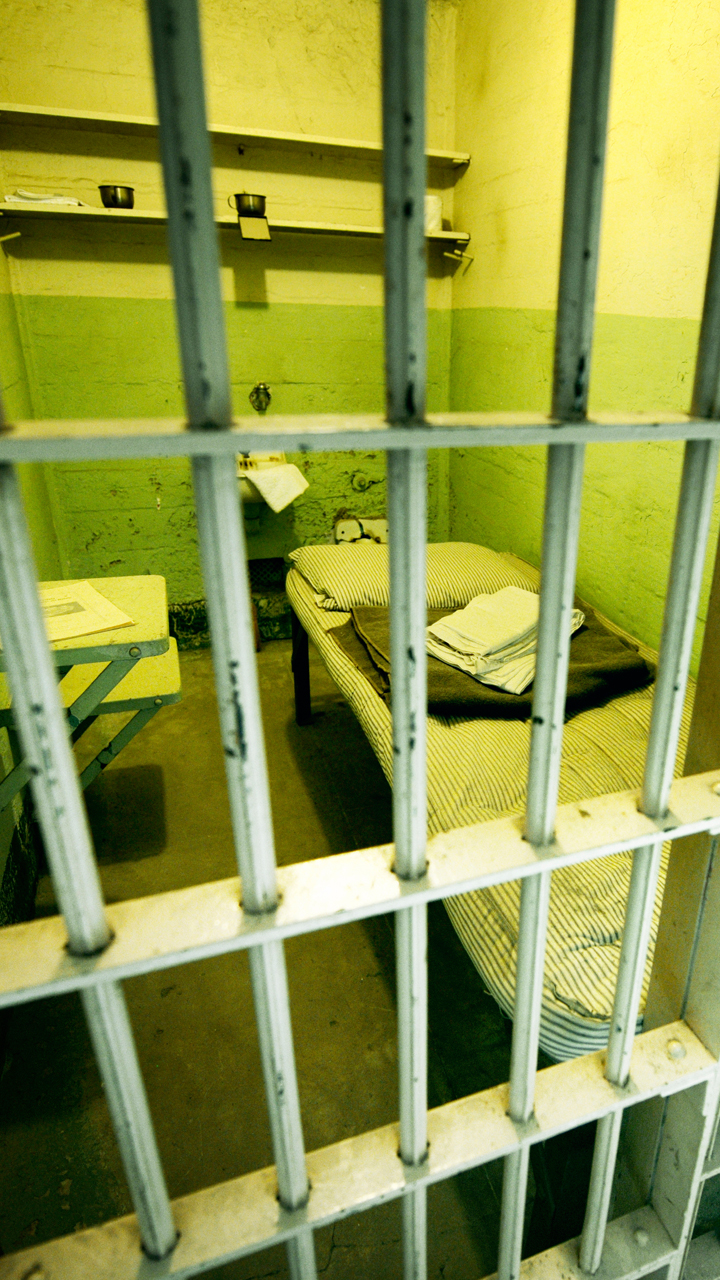 I'm just going to start this out by saying "Do yourself a favor and call Lisa". After my first encounter with Lisa I knew I would never do business with another Bondsman. She is to say the very least helpful, genuine and professional. Not only does she put her brain into her business but her heart as well. I am thankful to have had Lisa to work with through these stressful situations. You can not imagine the amount of stress was taken off, knowing someone on the other side had their best interest at heart. Thankful, thankful, thankful.
- Kerrissa E.